Thanks from Tajikistan: Cluster Munitions in Gharm

This picture shows Schull mountain with the settlement nestling at its base. During the war, the mountains all along the Rasht Valley were cluster bombed with ShOAB and AO submunitions.

The aluminum alloy casing of a ShOAB is visible on the right, and the rusted steel of an AO on the left.

The town of Gharm in the Rasht Valley, central Tajikistan, is surrounded by steep hills and snow-capped mountains. During the civil war, some places on the high ground were defended with earthworks and trenches, the remains of which are still visible. These were mined defensively.

Reports suggest that the munitions were all dropped during a ten day period in 1993. Some intact cluster bombs struck the mountain and became trapped among outcrops. Others opened as designed, but the payload of submunitions landed on soft ground or snow and did not explode. 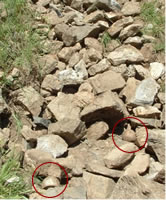 Four submunitions are visible among the rocks in this gulley.

With gravity, rain and snowmelt, these submunitions make their way into the gullies on the mountain side, and then move downhill towards the settlements. Every year there are accidents as they become visible and people mishandle them.

All too often it is local children who find them and are injured or killed.